How would you do the 10k challenge?

If you are like most of the world, you’ve probably never thought about this absurd challenge, or maybe even heard of it. If you are like me, now that you’ve heard about it, you are starting to imagine that second 6 mile run and the ensuing sideache. Or, you are thinking about a single type of food that you could possibly complete this challenge with. I heard about this challenge while on a long run with members of the Adams State cross country team. Apparently, the secret to 50 DII national championship teams isn’t consistent training and a deep culture of success established by great coaches, talented athletes, and 7,500 feet of elevation. It is trying to eat a jar of peanut butter, 4 Little Ceaser’s Pizzas, or 50 Reese’s Cups (all attempts I heard about) on a 12 mile double day.

You have less than a month before it’s a “New Year New YOU.” Here are 5 ways to live large before you become a prisoner to your New Year’s Resolutions.

– You would need to have 20 drinks of this, the highest calorie drink option at Starbucks. Pro’s = the caffeine would make you energized for the run portion. Also, it would be tasty, I think. Also, you aren’t really “eating,” so maybe it would be easier? Another pro – just think of it as being you doing all of the coffee drinking you would usually do in 1 week…just in one day…

2. The “if I’m going to do this challenge, I’m going to be as miserable as I can” method: Gas Station foods – “whhhhhhat is INNNNN this?”

At first, I was disappointed to see that a regular Krispy Kreme glazed doughnut “only” packs 190 calories. Now, those things melt in your mouth, so putting away 55 of them wouldn’t be too bad. But, we could just turn to…. The krispy kreme chocolate cookie dough donut!!!!!!

Made with Chips Ahoy cookie pieces, which is basically a stick of butter and bits of recycled melted plastic, these suckers come in at 400 calories per doughnut. That means, you could eat 5 for breakfast, 5 for lunch, 5 for dinner, 5 for an evening snack, and 5 after you’ve brushed your teeth, and walllah…there you go. Each donut gives you 4% of your calcium and 7% of your daily iron. Runners tend to struggle in both of those minerals. Get this: the 25 donuts you eat will give you exactly 100% of your calcium needs. Who needs a multivitamin now?! NO ONE!

This snack deserves an entire paragraph for itself. I couldn’t limit my analysis to just one snack, so I’ve given you 3 different “Little Debbie” options, complete with three different routes to a local hospital, thanks to Google maps.

the Fudge brownies mentioned are just the second worst brownie in terms of health made by Little Debbie. The website warns you to “not be fooled” by the presence of walnuts. Apparently, that doesn’t make these healthy? Wow….fake news if I ever saw it…

Here is a greater analysis:

Not far behind the cosmic brownie is the original fudge brownie with English walnuts. This one gets its bad reputation in the health realm because of its extensive list of artificial ingredients that wreck havoc in your body if consumed in mass quantities over time.

So, 35 brownies to 10k calories. That seems pretty easy to do actually. However, that will only give you 35 grams of fiber, which is literally…..(Chris Trageor pause from Parks and Recreation)

the amount of fiber I have at every meal I eat.

Look at what the article says and pay special attention to the last sentence!

If you are considering the above red velvet cake, are you really someone who is going to go, “Ya know, I think a red velvet pancake made from beetroot will taste just as good!”

I just love the descriptions from this site….

Also, just one cake gets you 330 calories – you are well on your way to 10k. Plus, the ratio of protein to carbs is a little closer to what you want post workout….again….eating for performance here.

We get it—you see the acronym P.B. and you’re instantly hooked. As a fellow peanut butter addict, I can attest to an intense devotion to this irresistible nut butter. However, beware of Little Debbie’s P.B. Richie because the addition of peanut butter stacks this little cake with extra calories and saturated fat. If you have a hankering for peanut butter, opt for a bowl of oatmeal with one tablespoon of the good stuff swirled into it (check out the next option below!!) And if you can relate to the woes of a peanut butter addiction, see if any of the 17 Signs You are Obsessed with Peanut Butterresonate with you!

3. The “Healthy” method – at least you will pass the food you ate in a “natural” way:

This is the way I honestly would like to try the challenge. Mostly because I have this thing with granola bars where I literally….can’t stop eating them. They are soooooo good. I sort of believe that I will either accomplish the challenge, or by failing, finally break myself of this “can’t stop eating them” habit. It’s a win-win situation. And if you are Michael Scott and are considering the financial benefit to Nature Valley, it is actually a win-win-win situation.

Oatmeal – the greatest food ever invented. If you made plain oatmeal, you would need to cook alot. 1 cup = 300 calories. So 10,000 is going to be 33 cups. Just to put that in perspective…the picture below is 2 cups with a ton of water, cooked nice and thick overnight: 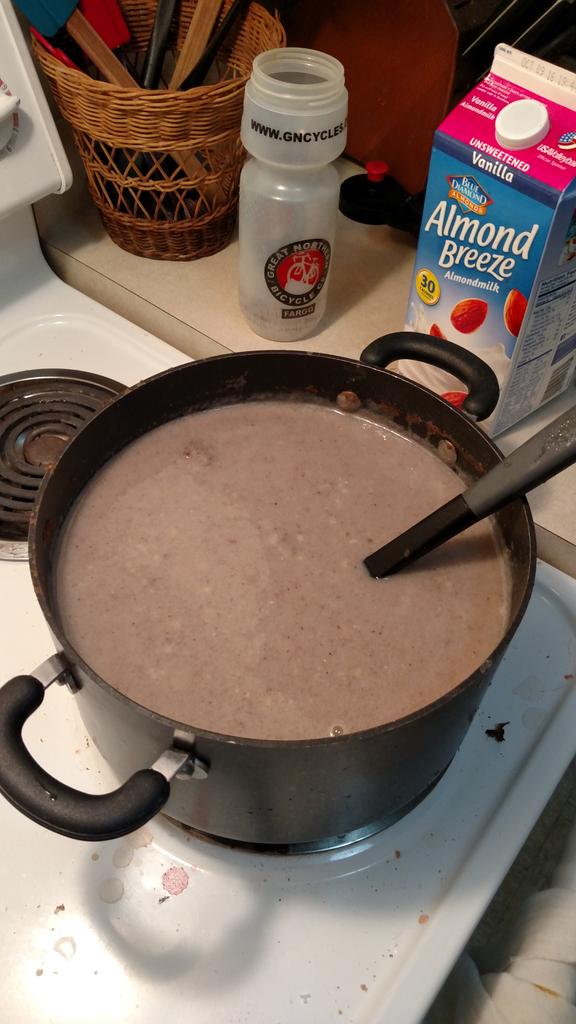 So….let’s just say you are going to have to go thicker to make this work.

4. The KFC/Mickie D’s method – the most bang for your buck – chicken or Big Macs – good until the second run, right?

Matt Stonie ate 25 of these in one sitting  wowza…….if you watch the video, he finishes number 17 about after 12 minutes of eating!!! He could easily do the 10k challenge!

5. The hardcore Parkour method – straight up dill pickles – 5 calories a pickle…use for endurance bikers only

Now, this might be the most crazy idea ever. You WILL at some point choke on pickle juice, so it would be terrifying for the entire day. You would have to eat so many pickles (2,000), you would have to eat 1.3 pickles every minute for the entire 24 hours. Assuming you will only be awake for 15 hours, and running for 2-3 of those hours, that leaves you at about 2.6 pickles every minute during waking hours….is it even possible?

Pros: you might actually run a calorie deficit trying to do the challenge this way. The metabolic cost of eating a pickle, and eating them, for the entire day, is probably over 5 calories per pickle. Plus, throw in about 1500 calories burned from the run….wow….

Sodium replacement for all of that sweat from running. However, this might be a little overkill. If you are going to do the challenge this way, I recommend doing it in the desert.

Cons: cost – imagine checking out at the grocery store with 2,000 pickles…Sam’s Club here we come.

Well, there you have it. Next blog post, we will talk about how to train for your fastest 10k ever in 2019.